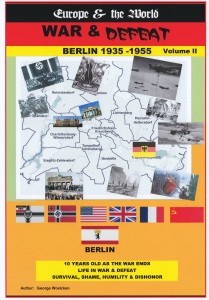 George Woelcken does an excellent job in capturing his family’s history dating back to WWII. This is an epic illustration of the human plight given from the perspective of a German gentleman. When reading this story the reader is instantly placed in the setting of war, violence, poverty, social injustice and survival. The history of this family was eloquently written. George made it a point to speak of the good parts of his family as well as the not so great points. This novel is definitely written for the history fanatic, who is willing to learn about capitalism, socialism and the human struggle for equality, as well as getting an insight to the German viewpoint. This is the beauty of this novel. Anyone can connect to the many stories and atrocities displayed.

There were several great parts to reading this book. The correlating of the family history to actual historical events were spot on. Not only was the writer capturing his personal experience, but he had obviously done his due diligence in researching the global events that were concurrent on his family timeline. Another aspect that was greatly appreciated was the German viewpoint of Hitler, the war and the aftermath. Specially, when George came to the US. It was nice to see how a German could come into a “Jim Crow” environment and point of the similar injustices that the African Americans and the Jews and Germans had to endure during this time. George also states the not so obviously point of the hypocrisy of “White only” signs in the land of the free. The reader can also appreciate learning about the values of George’s family. Even amongst all the drama, which happens in all families, there is a constant that remains solid throughout the book. Family will always help family. This was nice and refreshing to see.

Overall it was a wonderful read. It gives the reader some humanistic insight to that era, both domestic and internationally. I would recommend this book to any history enthusiast.