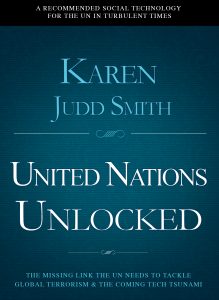 “Many people today recognize that humanity as a whole is approaching a pivot point that will have a proportionally larger impact on us than anything we have experienced before,” says United Nations Unlocked author Karen Judd Smith. In these rapidly changing times we live in, she asks the question ‘How can the United Nations and the tech world come together in a meaningful engagement?’

If the relationship between the UN and the tech world is one you’ve never considered, you’re probably not alone. Judd Smith draws a line from time honored social institutions to cutting edge tech companies that not a lot of people are talking about. At least not yet. She believes that these companies would greatly benefit the United Nations, if they were willing to get involved and that the UN can only remain relevant if they adapt. Of course, that’s the over-simplified version.

Judd Smith’s concepts are extremely well developed and researched. She has landed on two very different groups and drawn from a wide variety of disciplines and sources to support her claim that if they came together it would benefit our future in incredible ways. And, if not, our collective futures will be jeopardized. Again, that is a simplification. You wouldn’t expect to see members of the UN and CEOs of tech companies sitting down to dinner together, but if they did they might be one step closer to putting “all of these individually brilliant, but disparate pieces together into working strategies.”

Meta-Nets play a big part in United Nations Unlocked as do various leadership models and strategies. Judd Smith’s desire to save the UN from obsolescence is clear and a partnership with tech companies makes a lot of sense, as unlikely as it may seem before being dug into. You will definitely find yourself thinking, “I never thought of that!”, but it is that thought-provocation that will ensure further discussion.

United Nations Unlocked ends with a series of letters to various officials, which are eloquent and inspiring, but a bit confusing as they are addressed in an intro directly to the officials and not the readers. “Can I send one?” you might ask. “Was this book for them and not for me, the average reader?” That would explain the highly technical language, but the intention of the book as a whole is to start a conversation and send out a call to action, which it achieves ten-fold.