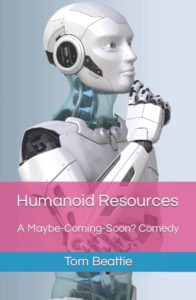 Humanoid Resources by Tom Beattie is an entertaining play that takes a look at technology and the future and addresses the innate fear people have of technology taking over. Shirley Mac, H.G. Roswell, and Ludd have to learn to adjust to working under Slash 4-27, an android hired as their new manager. All the while the HR manager Ms. Conduct and CEO Bigly Bupkis are up to no good devising a scheme to replace all the jobs in the company with robots rather than people. Beattie presents a play that provides not only commentary on technology and the state of the world but a lot of humor as well. With witty characters and funny pop culture references, readers and viewers will love Humanoid Resources.

The manuscript is quite clean and free of any grammatical errors. It has clearly been well proofread and edited. The writing style comes across as intelligent and reasonable and it is written in typical play format. With stage directions in parentheses and italics, it is easy for readers to follow the plot and actions of the characters. The events of the play occur in a logical manner and develop nicely throughout the play.

The author clearly has an understanding of different technologies, possible technological futures, and the fears that people have concerning this technology, such as the fear of robots taking over jobs. Beattie also knows how to appeal to people who find the more “primitive” time period of the nineties and early two thousands humorous. The wit and humor contained within Humanoid Resources is one of the best features of this play.

The author’s notes and interview with the author included in the back of the book provide further explanation about the choices he made for this play. Readers will enjoy getting to see this commentary explained and may better understand the play. If being performed, the author might consider having abridged versions of these sections printed in the program to better help the live audience get information and satire which only readers had previously had access to. The H.R. Bodkins section of the book is quite irrelevant to the play but is an entertaining read nonetheless. The author’s wit and humor really shine here.

The intended audience is most likely people who both appreciate technology and politics and find the fears harbored by many quite humorous. Those that enjoy satire will also love Humanoid Resources by Tom Beattie. Beattie clearly understands his audience and how to appeal to their sense of humor. While, at first, it seems like this play is meant for a very niche audience, Beattie’s humor will appeal to a wide variety of audiences.

Overall, Humanoid Resources by Tom Beattie is a fun and humorous play that audiences well acquainted with technology and the fears surrounding it as well as those that enjoy the funny pop culture references to a more “primitive” time will enjoy. The play absolutely plays on the concerns that many older generations have about technology taking over while presenting young people who aren’t too worried and quote the 90s for fun. It is a refreshingly modern and funny play.