The Hermit and the Time Machine 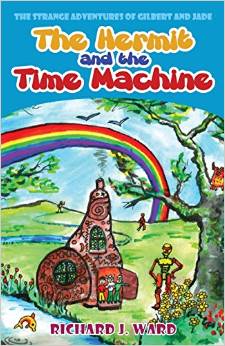 Title: The Hermit and the Time Machine

What a delight for children, and for adults willing to suspend reality! The Hermit and the Time Machine is clever and charming with an environmental message that is handled in thought-provoking ways – robots using recycled dump materials, no more humans in existence because they polluted and poisoned the planet. Author RJ Ward’s writing is very descriptive in terms of characterizations (especially with Professor Boson and with the robots) and locations (the beach scenes and the Professor’s home in particular).

Pacing and length of the story seem just right. It’s clear from the overall language, the primitive but charming illustrations and even the title of the book, that it is meant for children, who are sure to enjoy it.
However, some technical and structural glitches prevent the book from being all it could be. It could use proofreading as well as some minor editing or rewriting.

The proofreading would involve fixing minor issues of overuse or misuse of punctuation in some places, and non-use in areas where punctuation marks are needed. Some basic grammatical or mechanical problems exist, too, where there is too much space between lines near the end of each chapter, unless that is only showing up on this reviewer’s reading device. The Table of Contents could use some extra spacing between the chapter number and the page number, since it looks awkward as it stands now.

But these are easily fixed and not what stand in the way. More important are a few language issues and cases where the author seems to presume the reader and the characters are in on what he is thinking, yet he shows no concrete evidence to support this.
Regarding language, for the most part it is child appropriate. If it is intended for adults to read to their youngster, they could explain any difficult wording. But for young readers reading for themselves, words such as “elongated”, “bulbous”, “globules” and so forth seem a bit too advanced and in contrast with the ease of the rest of the language.
The author should take a second look at some plot issues and that nagging problem of mentioning things that only he would know. There is an instance where the trio has landed in the time of the robots and Jade wonders what the robots are building.
It’s written that Gilbert seemed like he had a fairly good idea but didn’t say anything yet. To whom did he “seem” to have an idea? There’s no indication that Jade sensed this and no words are spoken by Gilbert to confirm this. It might be better to say that he felt he had a fairly good idea.

When Gilbert’s head floats and then comes back onto his shoulders, it’s written that things were back to normal “for a little while.” How do we know at this point that this is the case? How would readers know it was for a little while?
It’s written that Jade feels the kids at school would never believe the adventures she and Gilbert were yet to have. How does she know more adventures are ahead? The author knows, but no one else does.

At the beginning of the book, Gilbert and Jade are introduced but not fully explained. It takes most of the book to understand whether they are brother and sister or friends, which is not critical but might help readers relate.

Lastly, it’s said that Gilbert researched the man they are about to meet. He knows he’s a hermit and a scientist and that he only eats fish, knows where his home is, but not his name. Some of this he may have guessed while walking in the area, but otherwise, did Gilbert do an Internet search for “hermit” – “man who is a scientist” – “man who only eats fish”? It seems a bit all-knowing again.

When all is said and done, however, the book is highly entertaining. The subtitle – The Strange Adventures of Gilbert and Jade – hints at a series. That would be welcome news indeed to those who read this first installment.